← more from
Black Truffle
Get fresh music recommendations delivered to your inbox every Friday.

by Will Guthrie & James Rushford 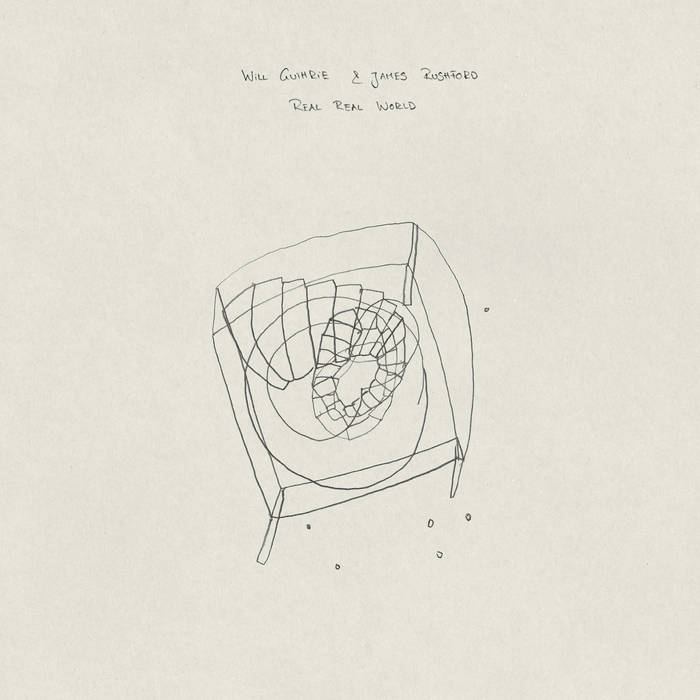 Real Real World is the first collaborative effort from Nantes-based Australian drummer/percussionist Will Guthrie and Australian keyboardist/composer James Rushford.
Primarily recorded in a fluid, spontaneous studio session in Nantes, with overdubs added later in Melbourne and Nantes, Real Real World presents five spacious, unhurried pieces that inhabit a unique sound world characterised by wheezing, half-voiced organ chords, chiming metal percussion, and eruptions of small sounds. Beginning with the eerily beautiful, shakuhachi-esque sound of Rushford performing on detuned portative organ, the opening title track is abruptly transformed by the entry of Guthrie’s sizzling cymbals, deep gong strikes, and rustling hand percussion. On the epic ‘Lumbering’, which occupies the majority of the record’s first side, organ chords define a space in which a kaleidoscopic succession of amplified thuds, chiming bells, rustled and dragged objects, and abruptly silenced clusters advance and recede in an oneiric blur, eventually making way for a passage of Guthrie’s virtuosic polyrhythms, itself unexpectedly overtaken by waves of melting fairground organ.

The record reaches an energetic climax mid-way through the second side with the stunning ‘Slakes’, where lugubrious chords in the organ’s lowest register are joined by Guthrie’s skittering rhythms, which somehow manage to call to mind both the most chaotic moments of Balinese Gamelan and the stochastic breakbeats of late-90s Autechre. On this piece, Guthrie and Rushford are joined by Melbourne saxophone maverick Scott McConnachie, who contributes an alto sax solo of burning precision, working with a single-minded palette of piercing long tones and wild intervallic leaps.

Though it makes extensive use of overdubbing, Real Real World retains a strong sense of having been performed, rather than constructed: while at times the fleeting succession of events can recall electroacoustic music, its primarily acoustic nature and unhurried pace is also reminiscent of the music of AACM affiliates or Marion Brown’s classic Afternoon of a Georgia Faun. Immediately engaging while also hiding countless details in the folds of its polychrome fabric, Real Real World is a relaxed and joyous document of collaborative musical invention.

Bandcamp Daily  your guide to the world of Bandcamp